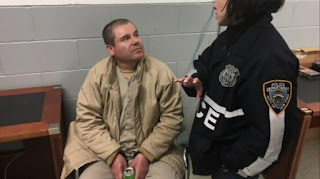 Requests made by the defense of notorious drug lord Joaquin "El Chapo" Guzman were batted down by the judge overseeing his second hearing at a federal court in Brooklyn on Friday, February 3. Attorneys representing Guzman argued that his prison conditions have been "too restrictive," with them citing that he has been ordered to remain locked in a cell for 23 hours out of the day. "He's only permitted out for limited members of our office and one hour of exercise a day — it's extremely restrictive," public defender Michelle Gelernt said while advocating for a lightening on the restrictions. But Judge Brian Cogan wasn't sympathetic to his plight.

"They're taking extra security measures. I think we all know the reasons for that," Cogan said. His statement was in reference to El Chapo's reputation for escaping prison, a feat he's famously pulled off from maximum security institutions twice before.

El Chapo now also faces pressure to speed up the process of acquiring the services of a private lawyer, after Cogan ordered him to disclose his financial status. The Mexican kingpin has faced questions as to why he is receiving the counsel of public defenders when his fortune has been assessed well into the billions. Prosecutors from the Eastern District of New York cited the success of his Sinaloa Cartel, a report by Forbes Magazine, and the U.S. government's $14 million suit against him as evidence that he can afford a lawyer, in a letter delivered to Cogan last week. However, Gelernt insists on his behalf, that El Chapo Guzman "has no ability to hire a lawyer" because for the time being the restrictions placed upon him prevent him from being in contact with family and associates who might be able to extend him access to funds.

For the time being Cogan has ruled that Guzman may continue to receive the services of a public defender, but must submit an affidavit making a case for why he currently needs one.

Posted by Gansta Marcus at 8:43 PM