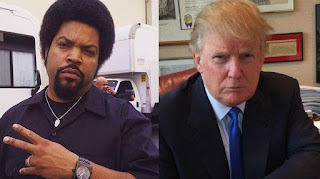 The rapper took to Twitter to express his frustration over the ad which shows him wearing a Trump shirt with the message, "Rapper-Actor Ice Cube Endorses Trump. 'We need a common sense President.'” He replied to the message with a tweet that said “stealing endorsements is not how you become the president of the United States, homie. Leave my name out ya mouth. I will never endorse a mothaf**ka like Donald Trump EVER!!”

Even though Cube clearly does not support Trump, he doesn’t seem to be much of a fan of Hillary Clinton either. “She might be the president of the United States,” he said during a Bloomberg Politics interview in April. “And if she becomes the president of the United States, we need to know what she’s thinking. How does she think? How is she gonna handle this? How’s she gonna fix this? She helped create it in a way. How are you gonna fix this?”

Posted by Jessithapromoter at 1:35 AM