Amber Rose Talks Wiz Khalifa, Twerking, And Having Another Child 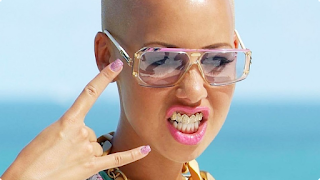 Amber Rose has made it no secret that her relationship with ex-husband Wiz Khalifa is as good as it has ever been, recently telling People magazine in fact that they're "almost better divorced." Those curious to know just how good they might still be, will find an example of a woman open to challenging traditional family structures to make her home complete, inviting the idea of continuing to have children with her lover-turned-friend.

The once high profile couple are the parents of a 3-year-old son, Sebastian Taylor. They started June off in an unconventional fashion, when they were reported to have celebrated their divorce settlement together at a strip club in Los Angeles, but Amber clarified that the papers were signed five months prior. Their unofficial union is one the 32-year-old impending late-night talk host says they see as essential for the welfare of young Sebastian. When asked what Wiz thinks of the idea of one day lending over a few of his baby makers, she told People: “He’s like, ‘No,’ and I’m like, ‘Well, I’m just gonna have to take advantage of you then.’”

Amber Rose has become one of the most outspoken and prominent advocates for slut-shaming and sexual agency, so it should come as no surprise that she views twerking with her 3-year-old son as a bonding endeavor. 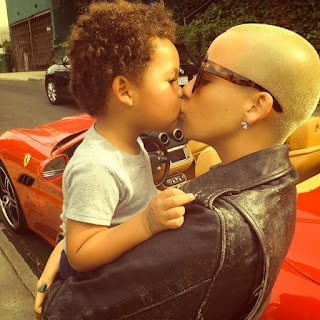 Amber explains that she has long been a fan of the booty-shaking move. Now, call me crazy, but I think this is the cutest thing ever. Yes, the twerking trend started out as a very sexual dance, but it's become so normalized in our cultural mindset, it really isn't sexual at all anymore. And come on, this is a toddler. He's not going to be morally corrupt by shaking it with his mom.

Amber has always stood by her unorthodox methods and I applaud her for it. For too long women have been pigeonholed and boxed into an unrealistic standard society places and it's wonderful that she's refusing to conform. Her audacity to be her true and authentic self is radical and necessary for the feminist movement.
Posted by DJ Sippitakeover at 9:40 PM