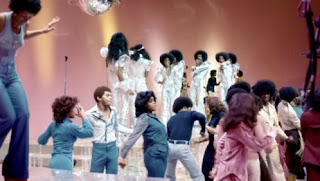 Anthony E. Zuiker, who is most famous for his work creating the crime show CSI will be working with Matthew Weaver, the producer of Rock of Ages, on the Soul Train project headed for Broadway.

Weaver also seemed excited to be working with Zuiker, saying, “His commitment to Soul Train, the era, the people and the music is unbridled, and his willingness to share his passion and vision with the Soul Train community is what makes him such an original. Anthony’s vision for Soul Train the musical is emotional, deep, funny, edgy and authentic. I think people are going to be very surprised and deeply touched.”

The production has been described as a “lyrical narrative,” which will tell the story of show creator Don Cornelius and will use more than 20 hit songs from the classic music show during its heyday.
Posted by Gansta Marcus at 7:22 AM