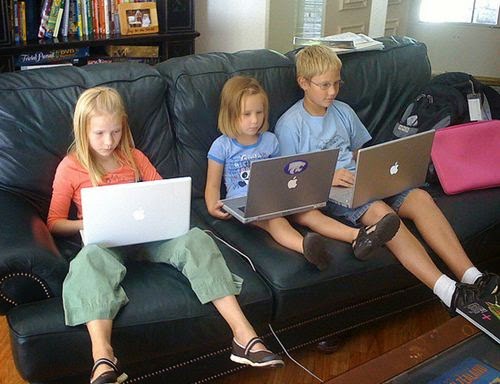 I don't know what has happened to the world and the internet, but something or someone needs to help make a change. With so much nudity and profanity going on, do you really want your kids exposed to this society? When the internet gods created internet, maybe they didn't realize that one day, kids would use Facebook to smother themselves.

This not only include the critical concerns about their online safety, and what they see. Some parents will use their own email accounts to make their kids' Facebook page, but how far will that go? Average kid over the age of 10 probably has a Facebook, Twitter, or some kind of social media account.

As long as kids don't abuse the use of facebook there is nothing wrong with them having it, but teens minds are to weak these days to handle what they see. Just as our kids have to wait to be the right age to drive, drink and vote, the same should be for social media. Facebook for kids should not have ads and there need to be "extra privacy".

When people start talking about changing the Facebook limits, it's important to note that there is already a tremendous amount of kids who are members. Use of Facebook and Twitter among children ages 8 to 12 is skyrocketing. Even Mary Kay Hoal says kids deserve a healthier social networking experience than Facebook.

Facebook is hugely distracting kids school performance and how they respond to things. Parents letting kids have Facebook pages, with parental supervision, is a good first step toward learning safe online behavior.

Young kids need unstructured play, outdoor time, hands-on activities, and face-to-face interactions with other kids. It's part of their development. Getting them involved in the addictive world of Facebook too young may stunt their growth in more ways than one. It also opens the door to a more sedentary lifestyle, which contributes to childhood obesity.

There are lots of ways for your computer to get infected with viruses, spyware, and other malicious software on social networking sites like Facebook, and kids who haven't even hit their teens yet have little to no understanding of what malware is or how to avoid it.

Young kids are very susceptible to just going with the crowd, and that goes double when the anonymity of the Internet is involved. Preteens may be more likely to follow the lead of peers who are making rude comments online.

In elementary school, kids are developing skills like how to study and do homework. Introducing Facebook during this critical time could disrupt solid study patterns and get them in the habit of trying to social network and do homework simultaneously.

The majority of Facebook's users are older teens and adults who may post suggestive photos or use inappropriate language for your under-13 child to see or hear. If your preteen absolutely needs to social network, many parents prefer more child-oriented sites like Togetherville for this reason.
Posted by Gansta Marcus at 7:17 AM