Chris Toppa - I Will Not Get Up Video 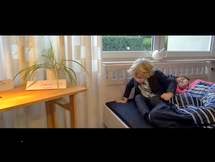 After the wide attention for the music video/single "Long Time" we just released a new video/single by Chris Toppa called "I will not get up". The single is taken from the debut album "Connected". Chris Toppa is one of the upcoming german reggae artists, who played at Sting Festival in Jamaica in 2011. The last months he is on a tour through Germany and neighbouring regions to promote his album.
Posted by DJ Sippitakeover at 11:30 PM