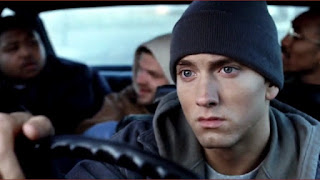 It's been since 2002 when Eminem dropped the movie '8 Mile' for the world to watch and that they did. 8 Mile is a 2002 American drama film written by Scott Silver, directed by Curtis Hanson, and starring Eminem, Mekhi Phifer, Brittany Murphy, and more.

“8 Mile,” a movie about a fictionalized Eminem's rise from Detroit's darkest corners, starred the rapper as himself and banked $51 million during its opening weekend. The film has since earned $242 million in global sales on a scant budget of $41 million.

"Eminem wins by a knockout!" raves Rolling Stone, as the Grammy Award-winning phenomenon makes his feature film debut in this gripping story about the boundaries that hold us back and the courage that can set us free. For Jimmy Smith, Jr. (Eminem), life is a daily fight just to keep hope alive. Feeding his dreams in Detroit's vibrant music scene, Jimmy wages an extraordinary personal struggle to find his own voice and earn a place in a world where rhymes rule, legends are born and every moment... is another chance.

Is Jay-Z Or Eminem The Best Rapper Right Now?

Did Machine Gun Kelly Murder Eminem?
Posted by Gansta Marcus at 3:21 AM