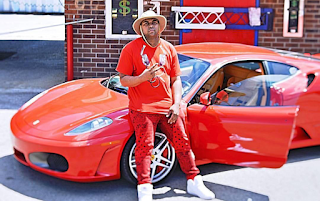 V-Lo The Maestro has had a lifelong passion for music. Like so many independent rappers, his dream was to be able to see his music video on BET television, a goal that he’d held on to ever since he was a child in his rural hometown of Washington, Louisiana. With a population of roughly 943, Washington, Louisiana is a small town with one stoplight and no Walmart. Here, students are transported by yellow school buses to the nearest city for classes. Washington is the place where V-LO The Maestro, as an independent rap artist, began to think outside of the box and reach for opportunities beyond what he was limited to locally. “I always knew if I made the music and produced a quality product, I’d find a market. The Internet has made it possible to take the sound out of the country, around the world, and bring it back home.” V-LO has been able to build his music audience organically, through grassroots efforts and an active Social Media presence. He’s grown his Instagram to over 100,000+ followers and his collaboration, “Tipsy,” featuring Kevin Gates, the impassioned rapper from Baton Rouge, earned 25,000 Spotify downloads while the music video reached over 1 million views on V-LO The Maestro’s Facebook artist page. V-LO’s music has made its way into rotation by famed DJs, including DJ Flex. These milestones helped pave the way for what had been V-LO’s dream for quite some time. Directed by Majacul, footage for “Can’t Phase Me” was filmed with permission at Nissan Stadium and features a string of exotic race cars—the Ferrari F430, Rolls Royce Ghost, Corvette, and BMW i8. The video tallied 200,000 views on Youtube. On April 4th 2019, the music video for “Can’t Phase Me,” by V-LO The Maestro made its BET television debut, an achievement that is also a monumental first for the residents of Washington, Louisiana. In recent years, New Orleans had become the state’s pipeline for rap talent, introducing Cajun flavor to rap music lovers through the likes of a bevy of artists, including Master P and son Romeo, Silk the Shocker, Mystikal, Birdman, and Lil Wayne (Weezy). They are among the most influential rappers in the industry, and their signature sound has become coveted by audiences worldwide. According to Nielsen Music reports, Hip-Hop/R&B is now the most dominant genre in the United States. Music streaming has now become the preferred medium, with rap artist Drake shattering music streaming records with an astounding 8.2 billion plays. One added benefit of digital distribution is that it also opens up opportunities for focused, independent music artists. A rap artist like V-LO The Maestro from Washington, Louisiana, a rural area nowhere close to New Orleans, could create and promote music from his hometown that reaches audiences in major cities, as well as in other countries. “Not everyone is going to believe in your dreams,” says V-LO. “Some might even come out and tell you your ideas are crazy because they don’t believe what you are trying to do is even possible. But whatever your talent, do it well. Do it with passion. Own it. And be bold enough to represent. I’m from a small town, but I didn’t let that stop me. I am so grateful that BET television has given me this opportunity.”
Posted by Jermaine McClinton at 7:26 PM