Taylor Swift Is The Woman With The Most Hot 100 Hits 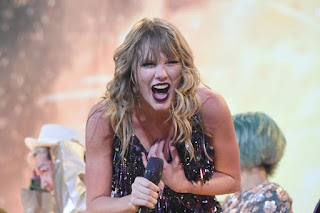 For the second time in 2020, Taylor Swift dominates both the Billboard 200 albums chart and the Hot 100 singles ranking simultaneously, as she debuts new titles atop both those lists (among many others). As if leading the charge on the two most important Billboard rosters wasn’t enough of a show of dominance, the singer-songwriter occupies more space on the songs tally than anyone else, and thanks to a slew of new wins, she grabs one of the most coveted honors ever from the most successful female rapper of all time.

This week, Swift debuts 15 songs on the Hot 100, an incredible showing for any artist, and one she’s managed before. Every song featured on her surprise new album Evermore finds its way to the ranking of the most-consumed tunes in the U.S., upping her count considerably.

With 15 new Hot 100 hits to her credit, Swift’s career sum rises to 128 total placements, enough to put her in fourth place on the list of the musicians who have appeared on the tally the most often. In stepping up on that important ranking, the former country favorite jumps over two acts, Future and Nicki Minaj, and it's the second name that helps the “Cardigan” singer make history in one more fashion.

By passing Nicki Minaj when looking at the number of songs she’s sent to the Hot 100 throughout the years, Swift has once again snagged the honor of being the woman with the most placements on the weekly 100-rung list. That’s an impressive honor, and it is one the two female powerhouses have been trading back and forth for some time.

Just two months ago, Minaj landed her one hundred and fourteenth Hot 100 hit with "What That Speed Bout!?,” a collaboration with Mike Will Made It and YoungBoy Never Broke Again. That put her one smash ahead of Swift, who sat steady at 113 thanks to the many new hits she charted from her first surprise release of the year, Folklore.

Now, Taylor Swift has pushed ahead of Minaj by a sizable margin, and she may hold that distinction for at least a little while...though the two stars could very well trade the title yet again. Minaj is one of the most prolific musicians in the business, and she never stays away from the Hot 100 for too long, either returning with a song of her own or by featuring on a track fronted by someone else. The rapper has also reportedly been working on her next album, and whenever she drops it, fans will surely send quite a few cuts from it to the all-genre ranking.

Posted by Jessithapromoter at 4:57 PM