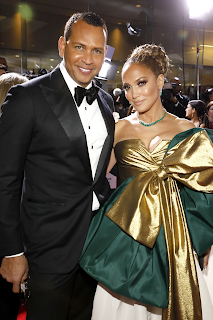 Alex Rodriguez and ex wife Jennifer Lopez called it quits more than a year ago, but there's still lots of love on his part.

"Look, we had a great time," he said on Wednesday's episode of iHeartRadio's The Martha Stewart Podcast. "More importantly, we always put the kids front and center in everything we do."

The former baseball star and singer-actress began dating in early 2017, and they were known as much for integrating their families — she has twins Max and Emme from her marriage to Marc Anthony, and he shares two daughters with ex-wife Cynthia Scurtis — as for their public displays of affection. After more than two years of dating, they announced their engagement in March 2019. Two years after that, they called it off.

Rodriguez continues, though, to be a J.Lo fan.

"Here's what I will tell you about Jennifer, and I was telling some of my colleagues here the other day," Rodriguez said. "She's the most talented human being I've ever been around. Hardest worker. And I think she is the greatest performer, live performer in the world today that's alive."

He said his post-J.Lo life is all about his two teens.

"You know Martha, thank goodness, no regrets. Life is good," he said. "I'm very fortunate. I wake up every morning and thank the good Lord for my health, for my beautiful daughters, who are now 17 and 14. That is my number one focus in life. You know, my father left me and my mother and my two siblings when I was just 10 years old. And I remember as a young man praying and saying, you know, dear Lord, if you ever give me an opportunity to be a father, that's gonna be my number one responsibility in life. And it’s been the greatest gift."

Alex Rodriguez similarly had nothing but good things to say about his ex during an August interview with Entertainment Tonight: "I had five years of an incredible life and partnership and also with my daughters, we learned so much. And now we have the opportunity to take that and move forward and say, 'You know what? We're so grateful for the last five years, how do we make the next five years better because of lessons learned?'"

Since the high-profile breakup, Rodriguez is reportedly dating Kathryne Padgett.

Jennifer Lopez, of course, has since rekindled her romance with Ben Affleck, and they became engaged for the second time in April.