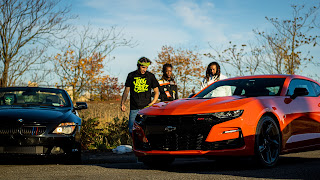 Directed by Hanz, the cinematic clip finds Rado riding out with his Joogstarz family in a slick, futuristic affair full of lots of expensive cars that basically aims for the “Tron, but a rap video” aesthetic. Rado has been taking over the airwaves and charts with his breakout single “Lucrative,” which was released few months ago ahead of the release of his upcoming album, Loyalty Is Key. With all of his shows and events being put on pause due to the pandemic, the New Jersey native has been taking his time to hone in on his online presence and networking, interacting with listeners and potential collaborators nationwide. He’s also been busy working on pushing the JoogStarz lifestyle through his merch, which is set to release across his website www.JoogStarz.com.
Posted by Jermaine McClinton at 12:04 PM