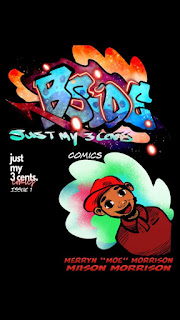 "The story at times may seem repetitive but in all actuality I can honestly say, it all started with a dream. A vision bigger than what others deem impossible". Merryn Morrison is a Georgetown, SC native. His desire to explore new territory, landed him in the upstate of SC. While in the upstate, Merryn began a journey that took him through many life experiences. While growing each year in the role as a father and a husband, Merryn learned more and more about himself as well. Various shifts in his life has made him stronger, wiser, and more purpose filled. His victory with cancer redefined who he was as an individual as well as showed him that his purpose on this earth was bigger than anything he could imagine. Hence, his daily tag line of “I woke up this morning”. Merryn has redefined the meaning of what life means to him and he has embarked on the task of showing the world through his unique comics, short films, and productions that it’s never too late to follow your dreams.
It’s never too late to create the reality that’s meant for you. Merryn has made it known and visible that despite what cards you are dealt, you have the ability to shuffle the deck and play them the way you want to play them. Merryn is on a mission to be the light that shines so bright through him as well as the light that’s needed in the world today. From writer to creator, Merryn is definitely leaving a stamp in the comic book world that will have everyone flipping their tapes and checking out, the B-Side. Check out the comic book at Justmy3cents.com
Posted by Tasha at 12:52 PM