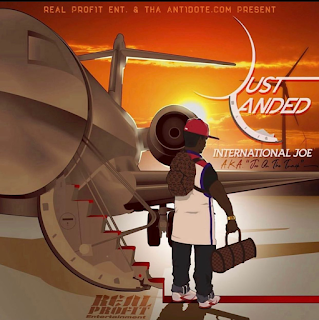 International Joe is here with his debut album, but to call him a rookie in the music game is all but untrue. The Baton Rouge representative has his handprints in his city's scene with production, a media platform in ThaAntidote.com and his Real Profit Entertainment label. With "Just Landed" we see that resume grow into him being an artist as well. The project see's him take the role of orchestra, collaborating with artists from his Real Profit imprint as well as other friends and colleagues he has met along his journey. In regards to it's inspiration International Joe said the following: "I've honestly met and connected with so many people over the last 15 years with this music that I decided I should do a project. We had just released Sean Elliot, Bullet Jones, & B-Thone under Real Profit Ent in the last year and I felt like just to give things a different sound it might be time for me to drop something. I've worked and produced for so many artists that I decided why not do a project. Doing music is easy for me.
Working and putting together ThaAntidote.com in the last 5-6 years kind of turned me into a facilitator as well so between being that and a producer I thought it would be dope to put together a DJ Khaled-esque project." "Just Landed" clocks in at 17 tracks, making it more than enough to get a good introduction to what International Joe can bring to the game. Check it out and let us know your thoughts. Be sure to follow the artist on instagram at @JoeOnTheTrack.
Posted by Jermaine McClinton at 12:30 PM