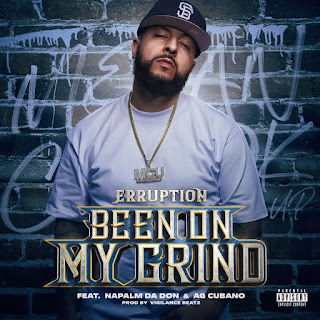 San Franciso artist Erruption drops off the banger "Been On My Grind" featuring Napalm Da Don & AG Cubano, produced by Vigilance Beatz.
Something to mob and smoke to, Erruption rides the beat like a veteran delivering crisp bars over the neck-breaking production. Tappin in his blood cousin Napalm Da Don as well as AG Cubano, Erruption keeps this collab a family affair with no weak links in the chain. Distributed through Mean Cook Up Ent/GT Digital/Empire, Erruption is showing us how to move as an independent artist in the new decade.
With heavy G-Funk influence, "Been On My Grind" is for fans of that classic West Coast sound, but with an updated current feel. Literally grinding all of 2020, Erruption follows up his previous visuals In My Bag and Too Lit with his latest single and teases fans with the possibility of a new project dropping by the end of the year.
Also recently featured on Mr Kee's new album We Are The Mob, Erruption is doing a phenomenal job repping San Francisco within the Bay Area Music scene and beyond. Stream the new single "Been On My Grind" from Erruption featuring Napalm Da Don and AG Cubano also be sure to follow him on Facebook and Instagram for new music and updates.
Stream: Erruption - Been On My Grind ft Napalm Da Don & AG Cubano https://linktr.ee/erruption

Posted by FVRTHERMORE at 9:52 PM