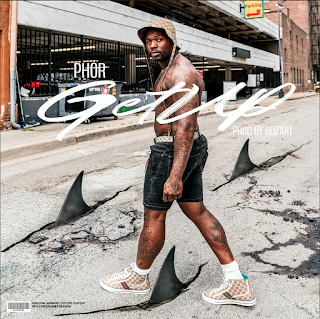 Chicago rapper Phor released his new single “Get Up” today. The accompanying visuals feature a chiseled Phor donning Gucci and counting money, while the track's opening verse offers motivation and inspiration to fans with the lyrics: I used to get in to trouble, nowadays my vision is tunnel, I'm tryna triple and double, 'till it don't fit in the duffle. The Rozart-produced track is available everywhere. "Get Up" is the follow-up track to Phor's recent release “Comfy” (premiered via Bossip) and lead single "Cardio," all found on Phor's forthcoming project titled, Self Love, out July 31st. His latest project, Cake, was a 13-song collection released to memorialize the passing of his cousin with the tribute track “Truly Missed”. In 2017, Phor released Butterfly, which delivered his biggest hit to-date, “Chi-Town.” An ode to the city that raised him, the song gained momentum at mid-west radio with well over 2M views on the A Zae-directed visuals and culminated in a remix from Chicago’s south side legend, BumpJ, Twista, and Lil Durk. Phor is a multidimensional creative that is the truest sense of the word. Whether designing sneakers for Nike post-high school, tattooing masterpieces, or crafting hits in the studio, his creativity is underscored by his influence in Chicago. Music is not a hobby for Phor, but instead his full-time passion - a passion so strong, it positions him for world-renowned musical success.
Posted by Jermaine McClinton at 6:55 PM