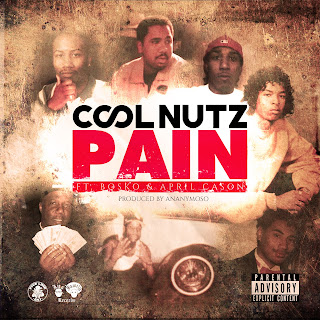 The latest single "Pain" from Cool Nutz is a soul touching audio landscape touching on the continued loss of friends and family.  "Pain" features the heartfelt vocals of Grammy Award-winning Producer/Artist Bosko and April Cason.  Production duties are handled by Ananymoso who is well on his way to critical acclaim with tracks like "Pain".

The official single was released on June 26th, 2020 via Empire Distribution.  We would love to have your support on the latest single, as "Pain" is more than music, but touches on the violence and "Pain" that impacts our community.

Cool Nutz has been one of the leading voices in NW Hip-Hop, and has carried the flag beyond the region via features in The Source, XXL, MTV2, and More.  Cool Nutz has also become a frequent collaborator with Hip-Hop stars E-40, Tech N9ne, DAME D.O.L.L.A, Mac Dre, BG, and more.

"Pain" is well-worth your support.  If you don't like this one, you won't like anything.
Posted by FVRTHERMORE at 1:06 AM