What If You Had The Chance To Meet Guns N' Roses? 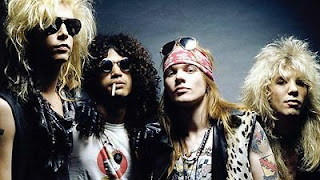 Guns N' Roses' debut album, Appetite for Destruction, reached number one on the Billboard 200 a year after its release. Is there any song that sums up the essence of Guns N' Roses more?

Although Guns N' Roses didn't officially break up, lead guitarist Slash left in 1996, Matt Sorum was fired in 1997 and bassist Duff McKagan quit later that year. Rose became a recluse, sequestered away at his home in Malibu.

As various members of Guns N' Roses began to encounter serious problems with drugs, namely heroin, Axl Rose decided to give the band an onstage ultimatum during a 1989 opening slot with the Rolling Stones.


With all this being said about the bands lifestyle, how would you react if you met Guns N Roses? What kind of questions would you like to ask? Fans Favorites and it's viewers would like to hear your answers and see you comments.

If you met Guns N Roses before, then what's your story. What would you like to say about your experience? Comment your thoughts below!