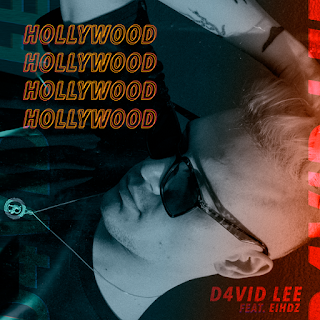 Montreal-based alternative singer-rapper-songwriter D4vid Lee releases his debut single/video "Hollywood" from his forthcoming fall 2020 EP on Joy Ride Records/Universal (Loud, Shash'U). Lee is finally ready to make the jump to the big leagues and showcase the result of many years honing his craft. Known in Quebec for his collaborations with rapper Rymz, and for touring with Juno Award-winning rapper Loud for over two years, Lee's new musical "renaissance" is more personal and refined.
The emotive new single "Hollywood" showcases the emerging music star at his finest; with his melodic and organically raspy vocals that highlight his hybridized singing and rapping abilities. Then add in his penetrating lyrics over haunting guitar riffs coupled with the heartfelt hooks and melodies of guest vocalist Eihdz that take this one over the top. The song's boom-bap style and organic textures transports the listener inside Lee's dreams, where he aspires to become a successful artist who can devote himself to his music craft and career full-time.


"Hollywood, a place where dreams come true, they say. The rise to the top looks easy if you look at how it's sometimes portrayed in the media, but the reality of the situation is that the long hours can be hard and difficult," admits the vocalist who spent time in the Montreal Anglo underground rap scene recording a few EP's under his old alias (David Lee) with his Backpacker Music band/project. "No one realizes the time you have to put in to achieve greatness. I wrote this song thinking I would never look back, just forward. It's important to find what you love, and go for it, especially in these hard times.

Don't be afraid to set small goals." He adds: "Eihdz and I have been building our career simultaneously for the past few years and I feel most artists share this same Hollywood dream. Well guess what? The time is now!"
Consumed by their desire to succeed, travel, and make a comfortable living off of their art, both Lee and Eihdz share the mic and invite the listener to follow them in their quest to live out the Hollywood dream.
The video directed by Alexandre Richard shows the duo in a North American house during a typically cold Canadian winter, exchanging their youthful dreams, while transporting themselves to a brighter world filled with promise, where the sun always shines - Hollywood.