Zae Imperial F/ Battlefield Pierre & Boss B - "My Side" 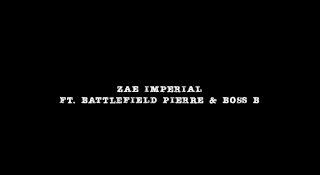 TheeBeGreatGroup presents Jackson, Mississippi artist Zae Imperial releases his official music video for his single entitled "My Side" featuring fellow Jackson, Mississippi artists Battlefield Pierre and Boss B. "My Side" is the first single on "Imperial MindState" album dropping next year. This visual gives you an in-depth look in to a day in the life on the different sides of Jackson, better known as Jacktown!
Posted by Jermaine McClinton at 2:24 PM