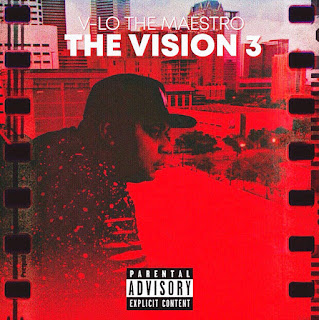 V-LO The Maestro has definitely been trending upward in 2019. Over the course of the summer he has finalized a partnership with Roc Nation's "Equity Distribution" and released his highly touted single "Ready" which featured Project Pat. Some may be ready to take a break and bask in the success at that point, but not V-LO. The Washington, Louisiana native is ready to keep his wave flowing with the release of his "The Vision 3" project. Acting as the follow-up to his 2016 "The Visions 2" LP, this new entry finds V-LO The Maestro bringing some of the southern twang he has made a trademark of his. Standing at 11 tracks, the project takes you into the world of V-LO as he manages to keep things catchy throughout while still bringing his personality to the forefront. Features on the set include Project Pat, LaBritney, Ice Doll, Just Brittany and Latangela Fay.
Posted by Jermaine McClinton at 6:49 PM