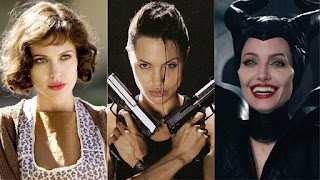 Hollywood superstar and filmmaker Angelina Jolie made her film debut in 1982. Since then she has married Brad Pitt and went on to star in some memorable roles.

Thirteen years ago, with her career in high gear after winning a Best Supporting Actress Oscar for Girl, Interrupted, Jolie went to Cambodia for the filming of Lara Croft: Tomb Raider. Angelina Jolie is the textbook A-list celebrity. She is a prototypical superstar in the Hollywood business.

Along with being an award-winning actress, Jolie is a successful film director, renowned humanitarian and one of the world's most powerful women.

With more than 30 feature films under her belt, two Oscars, three Golden Globes and a World’s Most Beautiful title, im sure it will be hard for fans to choose there favorite movie!


The movie Salt was not one of Jolie's best movies but it was one most played by the Wrap-Up Magazine.

Salt is a 2010 American action thriller film directed by Phillip Noyce, written by Kurt Wimmer, and starring Angelina Jolie, Liev Schreiber, Daniel Olbrychski, August Diehl, and Chiwetel Ejiofor. Jolie plays Evelyn Salt, who is accused of being a Russian sleeper agent and goes on the run to try to clear her name.

Posted by DJ Sippitakeover at 4:29 PM