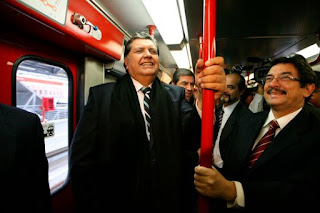 Former Peruvian President Alan García shot himself in the head and died Wednesday moments after police arrived at his home to arrest him on corruption allegations in Latin America's largest graft probe.

Police found García on the second floor of his home, a leafy mansion in the city's Miraflores district. He asked for a moment to call his lawyer, entered a bedroom and closed the door behind him, Interior Minister Carlos Morán said.

Prosecutors suspect the former president received more than $100,000 from Odebrecht, disguised as a payment to speak at a conference in Brazil.

García repeatedly professed his innocence and said he was the victim of false testimony by political enemies who accused him of taking more than $100,000 from the company. Odebrecht admitted in a 2016 plea agreement with the U.S. Justice Department that it paid nearly $800 million throughout Latin America in exchange for lucrative public works contracts.

Posted by Jessithapromoter at 6:00 PM