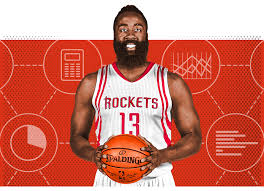 From an Arizona State University all-star to now an basketball superstar for the Houston Rockets
the name of James Harden. Today a lot of fans and critics with the work that he puts in on the basketball courts leaving with 55 or 60 points a game which that's the same point range with Lebron James.
But lately as the fans or critics would that now James Harden is like a takeover on the basketball court compare to Lebron. What would be your thoughts on the topic as who you would think is better.

Email ThisBlogThis!Share to TwitterShare to FacebookShare to Pinterest
Labels: Sports