British rapper and singer Stefflon Don has been making huge waves as of late. With Canadian rapper Drake coming out saying she is the one for him, the world is now talking.

Have a look below as The Wrap-Up Magazine present Stefflon Don in a way no one has ever. Take a look at her Top 5 hottest photos and tell us what you think of the artist.


She's got the looks, the skills and also the looks! Seems like Drake feels the same. Stefflon Don was born in Birmingham. She is of Jamaican descent.

Don was signed to 54 London, a subsidiary of Universal Music Group that was created just for her. Don was featured on the remix for American singer Halsey's "Alone" along with American rapper Big Sean.

Stefflon Don, 26, recorded background vocals for Drake’s song “Peak,” and it looks like she may have piqued his interest in a romantic way when they worked together!

Rapper Stefflon Don, who has gained fame in the hip hop world with her song “16 Shots”, which video clip has garnered over 12 million views on her YouTube channel. Stefflon Don’s net worth has jumped after the £1.2 million record deal. 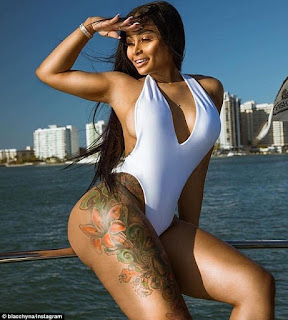 Stefflon Don recently dropped her debut EP, Hurtin’ Me earlier this year. Prior to that, she had released a number of singles including Envy Us, Real Ting, and Ding-a-Ling.
Posted by Gansta Marcus at 11:58 PM