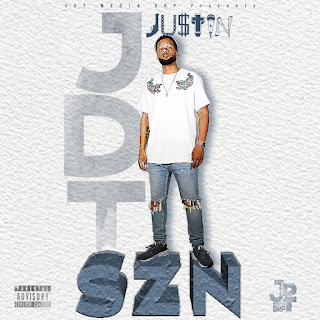 "JDT SZN" is the first of a four project audio series by "JU$TIN," featuring production from RJ3re, Mike Da Jeanyus, Cashmoney AP, and Beats By AUSK. This is the second full-length independent project by the NYC native and current LA transplant, and is the first project to be released under his JDT Media GRP imprint in 2018. The project consists of 10 original songs, as well as "JU$TIN's" underground hits "I Need My Reparations," "City Behind Me," and the MDJ produced "Money Machine Broke," that were featured on many online HipHop blogs and websites recently this year. "JDT SZN" is the introduction to "JU$TIN" an artist inspired by the NYC HipHop music scene of the 90s, who overcame the struggles and pitfalls of growing up in the Bronx to go on to enlist in the U.S. Navy, and participate in the War on Terrorism, so he can put himself through college to pursue his dreams of being an entrepreneur.
Posted by Jermaine McClinton at 4:32 PM