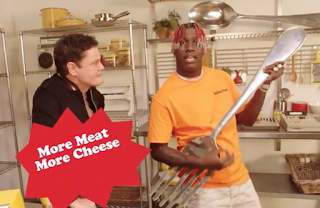 Lil Yachty is now the face of another big ad campaign, as a commercial surfaced that features a song with him and singer Donny Osmond.

In the song/video, Yachty can be heard firing off bars about eating ravioli while Donny Osmond surprisingly follows suit. This is not Yachty’s first venture into the ad world, as he previously dropped a song to go with a Sprite campaign that featured LeBron James.

Posted by Gansta Marcus at 9:48 PM