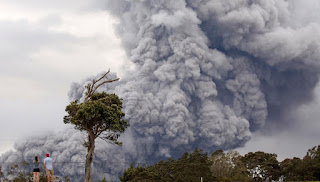 This eruption has been going on all week and the news and aftermath of the volcano erupting is getting worse. Kilauea sent a dusty plume of ash about 30,000 feet into the sky Thursday. The eruption has destroyed at least 37 homes and forced 2,000 to evacuate.


Officials handed out almost 18,000 masks to help residents deal with the fallout. The authorities say an “explosive eruption” at Kilauea’s summit has unleashed a hazardous ash plume but that the ash fall was “pretty limited” to the area around a national park.

Hawaii is the 50th and most recent state to have joined the United States, having received statehood on August 21, 1959.

The Hawaii Department of Health is warning consumers that no mask sold in stores provides protection from the extremely dangerous volcanic gases that are being released from the current volcanic eruption.

Rain kept the ash from going very far, and the ashfall was light, but officials still warned people in the area on Hawaii's Big Island to stay indoors and to use the masks.
Posted by DJ Sippitakeover at 10:29 PM