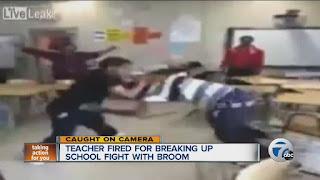 On May 19, a fight between two female teachers at the school was captured by a student in a cell phone video which has since gone viral. "The two school employees caught on video in the fight in the classroom will be terminated following the conclusion of the appropriate district processes."

Dekalb County Schools Public Information Officer Andre Riley says the teacher and the paraprofessional, whose identities have not been released, were arrested and charged with misdemeanor disorderly conduct charges.

Posted by Gansta Marcus at 6:18 PM