Jesus Tomb In Danger Of Collapse 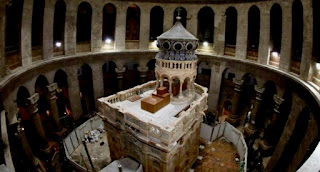 The shrine (or the "Edicule," as it is often called) is located within the Church of the Holy Sepulchre in Jerusalem. According to legend, Helena, the mother of emperor Constantine the Great (A.D. 272-337) visited Jerusalem in the fourth century and discovered the cave where Jesus was buried after being crucified. Whether Jesus was actually buried in the cave is unknown, and many scholars doubt that Helena actually discovered it; nevertheless, the cave has been a place of Christian pilgrimage for many centuries.

Since the fourth century, a series of shrines and churches have been built over the cave, each one eventually being destroyed or falling into disrepair. Today, the cave is covered with the Edicule, which in turn is covered by the Church of the Holy Sepulchre.

Repair and restoration work at the Edicule has been going on for the past year, during which the limestone bed that Jesus' body was supposedly buried on was revealed. National Geographic reported that the Edicule is in danger of "catastrophic" collapse if further repairs are not undertaken soon.

National Geographic says the NTUA team needs to conduct a new 10-month project, one that would cost 6 million euros (about $6.5 million), to repair and strengthen the Edicule's foundations. The project would also add new sewage and rainwater drainage to protect the Edicule from water damage. Archaeological excavations would need to be conducted before repairs begin so that the foundations of the shrine can be strengthened without destroying archaeological remains.
Posted by DJ Sippitakeover at 6:17 AM