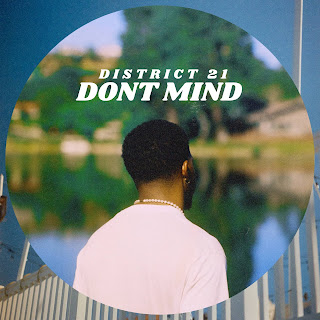 With the wind at his back following the release of his breezy, summertime love-song “July” rising West Coast artist District 21 is letting his guard down on his easy-listening banger “Don’t Mind.”
Equipped with production from Timbaland protégé Camden Bench, “Don’t Mind” features a spacious and fluid guitar rift layered over raw, instrumental drums. Opting for a joint melodic and lyrically driven experience, District 21 pings back and fourth between the smooth cadences of his tongue-in-cheek hook and affectionately rhythmic verses throughout the record.
‘Don’t Mind’ is basically a song about being blindly in love,” District 21 said. “It can be a good thing and it can be a bad thing sometimes because you might overlook some of the shit you should be paying attention to. But it’s just that feeling is something new so you ‘don’t mind’ whatever it is.” The Calabasas native has managed to maintain sustain momentum since his debut No Static mixtape in 2018, which featured his Mustard-produced single “Hardly.”
Posted by Jermaine McClinton at 6:31 PM