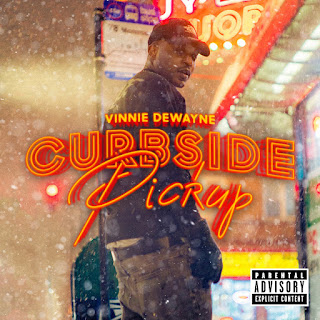 Portland raised, Chicago-based rapper Vinnie Dewayne makes his return with the release of his new project “Curbside Pickup.” The first official release since 2016 brought us the classic full-length project “St. John’s Scholar” as well as the “Duality” EP. Now living in Chicago, Vinnie Dewayne takes time to breakdown all the drama life has been handing out since we last heard from him. Having to bury his best friend Grump, fighting depression, dealing with relationship issues, substance abuse, and so much more - Vinnie finds a way to document all this on his latest release. Not many artists can express their emotions and thoughts like Vinnie Dewayne can on a song, a gift that has helped separate him from the pack since his earliest releases.
“Curbside Pickup” begins with the chilling dedication to Vinnie’s best friend Grump, who lost his life to a car crash in Portland, titled “Losing Direction” featuring Kali Scrap. Vinnie calls on his fellow St. John’s legend, Mic Capes for the monster, speaker-rattling collaboration “Collision” - where these two somehow raise the bar even higher than their previous works and show the audience what top-tier rapping sounds like. Other standouts include “Bundle Deal” featuring Kali Scrap, P. Hyph, and Snoogz, “Gump Day,” and “Back From The Dead.” Dewayne even takes time out to address the drama between him and Myke Bogan on “Huddle Up” and breaks down the situation Ike only Vinnie can.
Narrated by deep conversations with his cousin Tee Tee, “Curbside Pickup” is an honest and raw snapshot of where this young artist’s life has been since his move to Chicago, the loss of family and friends, and so much more. Wasting no airtime at all “Curbside Pickup” may only be 8 songs deep but each track plays out like a full-length chapter in Dewayne’s life.
Press play on Vinnie Dewayne’s new release “Curbside Pickup” now available on Spotify, Apple Music, Tidal, and more. Also, watch the Official Music Videos for “Warehouse” and “Bundle Deal” now available on YouTube! Plus be sure to follow Vinnie Dewayne on Twitter and Instagram to stay tuned for new updates and music.
Vinnie Dewayne - Curbside Pickup
Apple Music:
https://geo.music.apple.com/us/album/curbside-pickup/1554610524?
Official Music Videos from "Curbside Pickup"
Collision ft Mic Capes
https://www.youtube.com/watch?v=UsljLBQ7qzU
Bundle Deal (Official Music Video)
https://www.youtube.com/watch?v=V3zOepMhpr8
Back From The Dead (Official Music Video)
https://www.youtube.com/watch?v=u9W_9rQ93Pk
Losing Direction
https://www.youtube.com/watch?v=fKIqz7x9Yfg
Warehouse (Official Music Video)
https://www.youtube.com/watch?v=A-YCTneA9j4

Posted by FVRTHERMORE at 3:26 PM