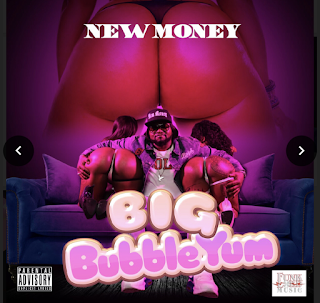 Robert Courtney AKA New Money was born and raised in Chicago, IL. He started doing music at about the age of 11. He was inspired when he heard Jay Z. That is when he fell in love with rap. His cousin and himself had rap battles against each other, doing songs by known artist and he always won. He had to work harder. While in High School he ended up having the privilege of meeting others like himself so they began to rap together and even did talent shows through high school. When he got a little older, decided to become a solo artist and started to focus more on writing his on material so it would be original songs.

Studio time came in and working with different producers. He loves old school rappers more. That’s because the old school rappers had real messages in their songs and they knew how to tell a story. Rappers like Future, Drake, and Kendrick Lamar he paid close attention to. NWA which is one of his favorite rap groups of all time because they were the hardcore rappers that stood up hard for what they believed in as black men in America. And of course Tupac was one of New Moneys favorite solo rapper of all time. He wanted his music to be influential like theirs. A song was hears that helped him to create "Big Bubble Yum".

Funklord was the producer and he helped him get into the music industry. Funklord then introduced him to Delly Dell and together they got furthered his music career. Soon he reached his goal to become a successful artist. Only singles were released, but his first album in the works. He had a featured on "TWEEKS" single "All On Dem Nutz".

New Moneys music is appropriate for ages of 18 and up. He has been compared to the rapper Eazy E and the comedian Kat Williams. It Is his alter ego that sees things when it comes to creating a sound in a unique way that is original. "There's only one New Money and that’s all me" he says. He went on tour with Project Pat as their opening act. He was a co-main artist which meant New Money was able to perform songs with varies artist like Uncle Beats and Tweek in the year of 2016. He has no barrier to music. Lately he listens to Kendrick Lamar and Pop Smoke. The music industry now is a question mark to him. "The music that is being played on the radio now and on live streams are songs that makes absolutely no sense TO ME" he says. He's currently working on a new single to be released soon called "Slick wit It".

Posted by Jessithapromoter at 7:13 PM