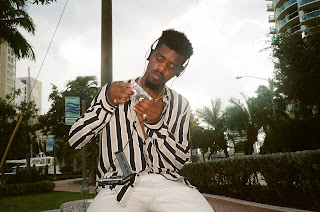 It’s quite clear Broward County Florida has become a central hub for up and coming musical talent. With his recent release “I’m So Clean,” 26-year-old Langston Blues looks to be a part of that exact crowd. At the age of six, Langston Blues began rapping and growing as an artist on a mission to be the most original artist he could while providing his own consistent sound. This track is a smooth and flow-y hip-hop anthem that perfectly showcases Blues’ artistic range. With the bouncy beat loop and catchy lyrics, this feel-good anthem is exactly what Blues’ tells us he intended the song to be, “An anthem about feeling good about yourself, feeling clean.” Filmed from South Beach at the Iconic Art Deco Hotel, James Hotel, the music video for I’m So Clean highlights the eccentric visuals throughout the location as Blues effortlessly creates a joyous, upbeat vibe.
Although he considers himself independent with no real “crew,” the potential he’s shown with this release looks to be all he needs to pop him as a bubbling artist in hip-hop. With an estimated October release date for his upcoming single that includes a “surprise feature that I know my fans will dig,” Blues is looking to get on everyone’s radar sooner rather than later.
Posted by Jermaine McClinton at 1:01 PM