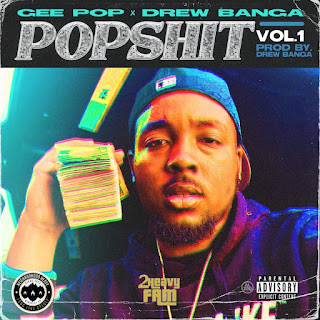 Berkeley, CA Rapper Gee Pop has the Bay Area talking with his new project “Pop Shit, Vol 1.” now available on Apple Music, Tidal, Spotify, and more.
Exclusively produced by Drew Banga, Gee Pop takes listeners on a ride through streets painting vivid pictures of the chapters in his life. Deeper than rap, with one listen you can hear the realness in Gee Pop’s lyrics and the pain behind his voice. Stand out song, “1 of 1” tells the story of a young artist taking his losses and turning them into victories through countless nights of hustle and grind. Drew Banga kicks things off with a memorable sample on “Summer Walker” and keeps the pressure on the entire project, which each beat dropping at a neck-breaking pace. With the official video for “Summer Walker” creeping up on 25K plays, Gee Pop and Drew Banga definitely aren't letting a pandemic slow them from doing numbers in the streets or digitally. Keeping things player on “World Is Yours,” Gee Pop’s laid-back vocals are a perfect soundtrack to smoke and ride to no matter where you live. Coming in at 10 songs and just under 25 minutes of playtime “Pop Shit, Vol. 1” is plenty of music to get introduced to Gee Pop and while still leaving listeners fiending for another volume.
Press play on “Pop Shit, Vol. 1” by Gee Pop now available on all digital streaming platforms and also watch the official music video for “Summer Walker” via YouTube!
Posted by FVRTHERMORE at 11:30 AM