Did The Movie "Set It Off" Impact You At All? 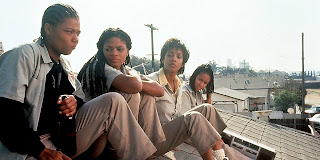 Our Movie Talk of the week goes to "Set It Off." The film stars Jada Pinkett, Queen Latifah, Vivica A. Fox and Kimberly Elise.

The sophomore film effort from music video director F. Gary Gray, Set It Off is a crime thriller about four women bank robbers from a housing project in L.A. But it's a lot more than that. Set It Off is the best, most affecting heist film ever made.

See Other Movies We Talk About

It's based upon the true story about a woman who was sexually abused by her stepfather at a very young age. We're wrapping up the script and we're hoping to go to a named actress with it once things are nailed down.

Posted by Gansta Marcus at 5:14 PM