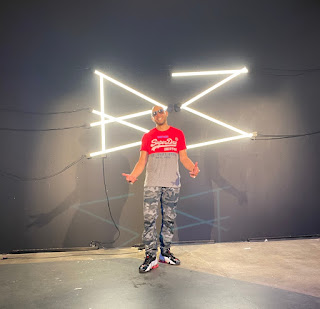 San Francisco rapper B3hree has been grinding non-stop in 2020 with multiple releases already under his belt. Today B3hree celebrates the release of his new music video "Run It Up" with announcing the new EP Truth Hurts produced entirely by Portland/Oakland artist TOPE!
B3hree and TOPE teamed up for the singles "You See It" and "Run It Up" early in 2020 and after showing some instant chemistry the two decided to lock in for full EP. On "Run It Up" B3hree pulls out all the stops with a Price Is Right Themed set and cameos from Nump, Alien Mac Kitty, TOPE, and more. Bringing new life to the single, "Run It Up" features B3hree in his bag as he breaks down his hustle and how to make money move, even during a crisis. Filmed in Sacramento, CA you can almost feel the energy through the screen as host Nump and B3hree add humor and swag to the visuals the entire time. With an all-star cast of film production, B3hree tapped in Director Vincent Huergas, DP Trizztan Custodio, Editor @OGMusicNatho, and Creative Director @BrittanyTakesPhotos.
Produced, mixed, and engineered by TOPE, "Run It Up" is West Coast and aggressive while still displaying TOPE's signature laid-back sound. With features and collaborations with Napalm, San Quinn, Thizzler On The Roof, This Is 50, The Source, and more, B3hree continues to raise his stock with each new release. Mark your calendars for the official release of Truth Hurts coming soon and be sure to press play on the "Run It Up" Official Music Video out now. Also, be on the lookout for the official Remix to "Run It Up" featuring Cool Nutz and TOPE!
PRESS
The Source
https://thesource.com/2020/06/22/b3hree-runs-it-up-in-new-song/
This Is 50
https://thisis50.com/2020/09/02/b3hree-shares-new-song-like-me-with-fredo-algebra/
Thizzler
https://www.thizzler.com/blog/2019/02/01/b3hree-death-of-a-saleman-album.html
All Hip Hop
https://allhiphop.com/music/b3hree-wannabe-ft-bryce-v-video-thP97ntO4UWBrvQN32lFlw
Social Media
https://twitter.com/b3hree454
https://www.instagram.comB3hree/
https://store.cdbaby.com/cd/b3hree2
Posted by FVRTHERMORE at 1:01 PM