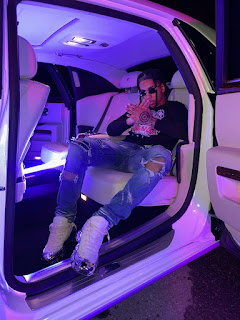 Tizzy Stackz is an exciting new artist from Toronto Canada who is on a trajectory for greatness. The 19 year old released his break out single "Boujee" in the Spring of 2020. The song took off as a viral hit, landing on some major editorial playlists on Apple and Spotify, including Spotify's "Viral 50 Canada" chart. To date the single has over 1.5 million streams on Spotify alone and the video has been generating quite a buzz as well. Following up the massive hit, Tizzy connects with the dancehall / reggae legend Busy Signal for a high energy and emotional new single "Man Now". Triumphantly conquering adversity in their own ways the sont highlights both artists ambition and how they made it out of their respective environments. There is a video on the way, check out the clips for some BTS of Busy Signal on set in Jamaica. The new single "Man Now" is now available on all stream services world wide and is a must add to your daily playlists! Be on the look out for new music and videos coming soon!
Posted by Jermaine McClinton at 11:09 AM