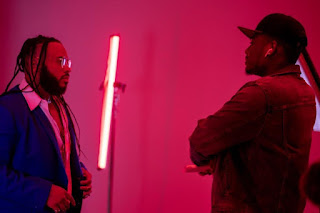 New artist Alert!!!! Who is this new artist Griotz, from the Bronx, New York, who just shook up the music scene. He's dropped three debut singles, two of which he was able to hold his own with former Cash Money's own SyAriDaKid & Just Us Records Kyah Baby. His versatile flow and amazing wordplay puts him in a category of his own. His ability to switch cadences so effortlessly, and create a multitude of styles of music makes me think we'll be seeing this artist for years to come. Sit back in your seats, eat your popcorn, and listen to the theatrics of Sway. Every hook is like a scene, his ability to tell stories is truly amazing and his confidence in his abilities comes out evidently through the song. "You know who you're talking to?" Now on, “The Baobab Tree,” he's showing us his conscious side. Giving us a message and showing how much he really cares about the progression of his people. Now, just when you think we have him in a lyrical box he hits us with a club banger called Only Fans to really show a wide range of ability in creating great music. Not to mention the music video his team shot is next level amazing. The Only Fans video seemed like something straight from a movie. The young Director EAD, created an amazing script to match this amazing song. Griotz and Kyah Baby had so much energy and showcased some dope acting skills in bringing their parts to life. Their chemistry on camera was amazing and made the all ready fire song shine so much more in the visual realm.
My eyes were literally glued to the screen to all the dope special effects in the video, that literally were out of this world. If you weren't a Griotz fan before this video, you'll definitely be one after! Really look out for this phenomenal new talent, a star is on the rise, and I'm telling you now, get ready to see it!
Posted by Jermaine McClinton at 12:41 PM