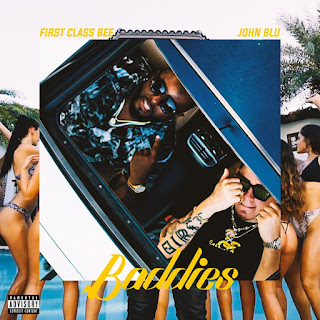 Chicago MC First Class Bee releases “Baddies” featuring John Blu today. A connoisseur of the finer things in life, Bee and John Blu team up in Miami for the summer anthem’s Visionary-directed video. The visual finds First Class Bee celebrating first-class beauty. Bee raps slick bars, while John serenades the beauty surrounding them. “Baddies” is available everywhere now. “Baddies” comes behind “New World Order,” Bee’s February release featuring Rockie Fresh, which premiered via HipHopDX. Both through his visuals and his music, Chicago rapper and businessman, First Class Bee represents financial freedom and ownership. He even met “New World Order” producer DJ Ozone at a local business group. Ozone became a great friend and key element to his current path in music. First Class Bee’s music is the soundtrack for a hustler lifestyle. Bee hopes his music compels his listeners to “keep pushing the boss mentality” while also maintaining their moral high ground.
With the release of “Baddies” and more new music on the way, First Class Bee is poised for a major year.
Posted by Jermaine McClinton at 7:31 PM