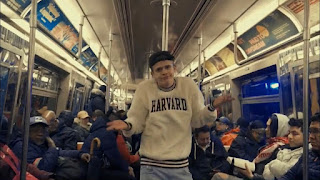 2020 has been the year of Da Ivy League in the south west region of the United States. Da Ivy League is a teenage New Mexican rap group trio with Vez leading the point. Today Vez released Gold Roses a freestyle from his mixtape “Mediocre at Best” available on all platforms. Gold Roses was shot in Bronx (Highbridge), NYC after a label meeting with Universal Republic Records in Manhattan. The video was shot by Editz Macias and directed by Jon “Beauty Salon” Hamm. Vez stated: “The real reason I did the song is because of my unrelenting aspirations to be a sex symbol and I felt like I had to learn from the best. From the sound, to the swag, to the look, I feel like Rick Ross has it all and he’s influenced everything about me to this day. Gold Roses was the perfect display of that. Oh yeah, and Drake’s cool too”.
Posted by Jermaine McClinton at 10:22 AM