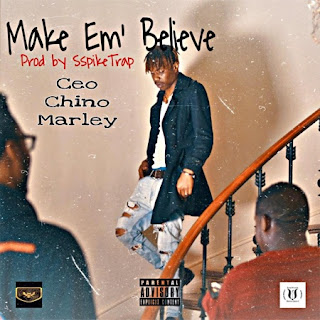 Birmingham Alabama's Ceo Chino Marley released his new single “Make Em Believe” with accompanying visuals today. Co-produced by trusted collaborator SspikeTrap and WockBoy, the song’s melodic soundscape perfectly complements Marley's infectious vocals. “Make Em Believe" is available everywhere now, watch the video HERE. The release of the “Make Em Believe” video directed by Diesel Films, comes fresh off the release of "Big Smoke" ft. Slimelife Shawty, premiered via HOTNEWHIPHOP. "Make Em Believe," "Big Smoke" ft. Slimelife Shawty, and Chino's Z-Money-assisted hit "New Wave" will all be on Chino's upcoming project. Dripology Vol. 1, coming May 1st. Raised by a single mother in the trenches of Birmingham, Alabama, Marley was exposed to life’s harsh realities from an early age. His music speaks to the experiences of both falling prey and rising above these circumstances. In 2016, Marley dropped his first independent release, “Count it Up.” Shortly after, he met Canadian producer, SspikeTrap via social media. Together they began to hone in on a unique, identifiable sound. The duo’s bond is so strong, Marley likens it to that of Zaytoven & Gucci Mane. Currently cooking up a joint release with Toronto producer SspikeTrap, Marley and Sspike are poised for a burgeoning 2020.
Posted by Jermaine McClinton at 10:36 AM