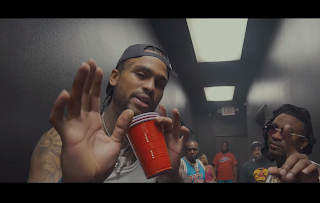 As D.Cross continues his cross continental European tour with Game that started January 30th in the UK, we get a new visual from this cold spitting Las Vegas rapper. This time D.Cross delivers a dope visual for his song "Never Cried," and along with it fans gets a big feature in Harlem-bred rapper Dave East With shout outs to Nipsey and real quotes about the streets and how he's made it to where he is in rap music today.

D.Cross talks that talk for this visual that was filmed right in the studio where it was recorded on the fly in Vegas just off the strip. D.Cross raps, "RIP Nipsey he told me to double up, but give me a sec I double back / I send my white b*tch to go get that trick again, then she and the pimp daddy double back / Off that white n**a alone did half a ticket / foot on they neck fuck half a pimpin / I'm from the north they like.


How he do it? Real ni**as like, He just had it in him." With more than 25 dates across the map, the Game Born 2 Rap Tour winds its way through Europe closing out March 1st in Budapest, Hungary so we expect lots of fans to get familiar with D.Cross this year.

Posted by Jermaine McClinton at 3:20 PM