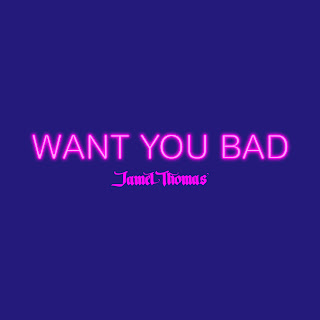 Jamel Thomas is an up and coming rapper, lyricist and instrumentalist based in musical hotbed city of Toronto Canada. Making a name for himself with unrelenting and powerful live performances, Jamel is no stranger to the stage and rocking crowds. Following up an impressive catalog of indie releases, Jamel’s sound cleverly mixes a great blend of genres to create a vibe and style of hip hop that is all his own. Sharpening his skills working with a range of great producers and creatives, Jamel raps, sings and plays the guitar on the new single “Want You Bad” and shows complete control in his craft and delivery. “Want You Bad” is a sexy new single to bring some heat to the winter months. The upbeat production produced by Florida native Lambo The Producer and catchy chorus give Jamel’s new single some major replay value. “Want You Bad” has just been released on all streaming platforms and is the latest in a string of new singles Jamel has been dropping since September. Garnering some solid fan support on Spotify his latest tracks are starting to do some numbers on the service and on other DSP’s as his fan base grows and more listeners discover Jamel’s music. Speaking on what he’s working on and what fans can expect, Jamel says “Right now I've been steadily releasing a new song a month since September 2019, leading up to an official album next Spring. New music videos will start coming out in February, with "Want You Bad" being one of the music videos planned. I'm always performing live around the Toronto area so fans can stay up to date on that through my IG. I have an upcoming tour across Europe planned for May 2020 and will be looking at coming to NYC to do a show in the near future as well. Most important thing for fans to know - if you like the music, follow me on all platforms! Spread the music to your peoples, help me come up and give the artists at the top new competition!”
Posted by Jermaine McClinton at 12:18 PM