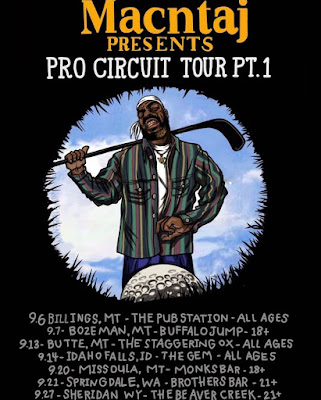 Seattle Rapper Macntaj drops off the dope new video for his latest single "Manny Fresh" appearing on his debut album, Trappy Gilmore 2 now available on all digital streaming platforms. Taking to the golf course, Macntaj pays homage to the one and only Happy Gilmore in his latest visuals directed by Justin Frick - going crazy all over the golf course and track as usual! Macntaj has been on fire with the visuals as of late including the Jay Park-assisted "Baby John" and the insanely dope "Ochit Wally," both available on YouTube. "Manny Fresh" finds Macntaj riding shotgun and talking shit like only he can with special guest - Teza Talks behind the wheel. Repping BlocStar Ent flawlessly Macntaj has been bridging the gap between Seattle's hip hop scene and the Sacramento ties he grew up with. With Trappy Gilmore 2 now available, Macntaj is also gearing up to hit the road for his Pro Circuit Tour Volume 1 hitting Washington, Montana, Wyoming, Idaho, and more for the first leg. Press play on "Manny Fresh" and be sure to tap in with https://www.macntaj.com/ for updates on tours, new music, videos and more!