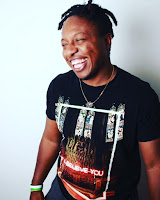 "What really inspired the song was really the lost of the great Nipsey Hussle. I was going to LA prior to his death, but when he passed that following day I knew I had express about it in a song somehow. I'm from the east coast but brought that vibe and mixed it with the west-side. I like bounce in my music and this was the right record for it. I still went to LA because I had to pay homage to a man who influenced the culture of hip hop.

I was born in Philly, crazy because i'm not your average Philly person I got a different sound and you can hear it in my music. I have 4 brothers and 1 sister. I lived in Philly for majority of my life until my best friend got killed due to senseless gun violence, that shook me up and still does today, but its one of the main reasons I started creating music. My moms moved us out to the suburbs and I have to say I see life from both side of the spectrum.

Growing up in a church household was a big influence as well, that where I get my style mainly from, you feel me? The soulful, but assertiveness is me on every track you can hear it. I been through so much in life but the only thing is I chose to keep going through any situation. My style is very unique. I like a lot of bounce in my songs mixed with feeling, and that's what I believe makes me stand out from other artists." – Philly Artist, Siiire

Posted by Portia Terrae at 4:44 PM