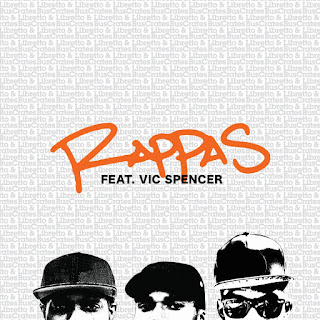 Watts/Portland Rapper Libretto releases the Official Music Video for "Rappas" featuring Vic Spencer and production by Buscrates. Appearing on the recent album Eternal Ridin' - Libretto and Vic Spencer take turns aiming shots at the fake rap cats in the industry today. Buscrates brings the jazz with his cool, laid back production giving Vic and Libretto enough room to float all over the beat. "Rappas" mixes smooth, summertime energy with aggressive lyrics and tones as Libretto continues to chin check the culture vultures and bring back that raw, rugged Hip Hop. Libretto and Buscrates recent project Eternal Ridin is now available on 2LP Limited Edition 12" Vinyl presented by Portland label Liquid Beat Records, available now directly through their Bandcamp site and on FatBeats.com! Eternal Ridin' was recently featured on Bandcamp's list of Best Hip Hop for June. As well as the Official Video for "Rappas," be sure to press play on the Libretto & Buscrates Eternal Ridin' Mega Mix displaying Libretto's lyrical ability live and direct.

Hit play on the dope new video for "Rappas" by Libretto and Buscrates featuring Vic Spencer and also be sure to support the movement and order a Limited Edition 12" Vinyl of Eternal Ridin' presented by the good people at Liquid Beat Records.