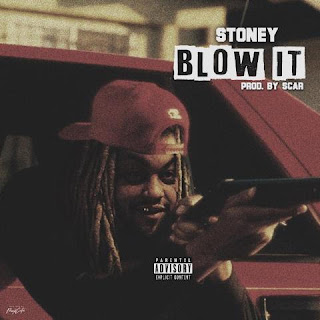 Continuing with a steady stream of releases, Eastern Pennsylvania rapper/producer $toney delivers his next single, “Blow It.” $toney offers up some boisterous yet sedated verses for this catchy single, highlighted by a cryptic organ for the Scar produced track. “Its just me elaborating on the sounds I tried to create with BRB but I also wanted to give it some different elements and some faster tempo stuff with some different flavor,” $toney said. Throwing in some nostalgia while calling out the clout chasers, once again $toney shows up on time for the fans. After working as an engineer for years behind the boards this uniquely charismatic rapper garnered the attention of ElevatorMag this past June with the release of his single, “BRB” which has now surpassed 150k plays on Spotify alone with “We got a lot of great feedback on BRB and I knew that people were going to love it. That was my first time doing a full rap record and I’m trying to step back into the rap aspect of things. It’s my biggest single yet and its over 150k, so we probably gonna be dropping that video in the next few weeks. The videographer that I have been working with has been doing great work lately. I really hope people like Blow It just as much” From the fan favorites like "2 Phones" and "Counterfeit," from his project "Blood on My Heart" to his newest singles like “Blow It” and "BRB," you can hear the growth in $toney’s music as he continues to prove that he is far more than just and engineer with real bars as a rapper. While "Blood On My Heart" was released in February, produced entirely by McCoy and was dedicated to Jimmy Wopo, fans of $toney can expect a full length project at some point in the next quarter. “I’m just trying to keep building up for the next six months to a year and build up as high as I can so that when I make moves of any sort I’m a foot ahead,” $toney explained about his plans for the future. “Next we got the BRB video and we are probably going to release a new EP before the end of the Summer, and definitely something else, but those are some of things I have planned before the end of the Summer.” $toney is a promising Pittsburgh, Pennsylvania rapper, engineer and producer who got his start in music as a young teenager. Mastering his craft as an engineer at local studios, $toney operated the boards for nearly a decade, recording a host of artists including the recently slain Jimmy Wopo, ringleader of Pittsburgh's notorious Lane Gang rap group. Marked by long blonde dreads and an imposing stature, $toney immediately grabs the attention of the crowd when he steps on the stage. In June of 2019 ElevatorMag, AllHipHop, Dirty-Glove, HipHopSince1987, OnlineCrates and over 40 websites took notice of his "BRB" single which catapulted the lauded talent to the forefront of Pittsburgh's rap scene. Prior to the release of his fan favorite "BRB," in 2018 the Eastern PA rapper released his project "Blood On My Heart".
Posted by Jermaine McClinton at 1:42 PM