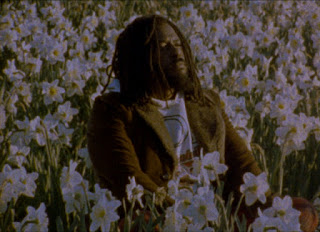 Every time a shooting makes the news talking heads pop up in small boxes and make loud arguments about how we shouldn’t rush to politicize what just happened. After all, the heads argue, guns don’t kill people. People kill people. But how true is that? Are the tools we use simply tools, innocuous until we give them meaning? Or are the things we surround ourselves with –– the things in our arsenal –– begging to be weaponized, for good or for evil? Guns, the new album from the critically acclaimed rapper and producer Quelle Chris, is a careful study of all these questions, an urgent record for urgent times.

In times that are often beyond parody, Quelle has never been a writer to shy away from the absurd. But Guns is dotted with references to the very real, painfully ordinary fates that might befall us –– be they getting gunned down in church on a Sunday or simply being forgotten by our friends after we’re gone. In preparation for both, Quelle lays his psyche bare.

“My goal with this and all albums is to create pieces people can enjoy, start to finish, for decades to come,” Quelle notes, fully aware that in a fractured, streaming ecosystem, any shard of your identity released into the world might be the lone artifact that survives. This is a record that is constantly aware of the peril all around us, but instead of shrinking in the face of that knowledge, it reasserts its creator’s identity. With Guns, Quelle Chris has delivered perhaps the most pointed, most personal, and all-together perfectly crafted album of his career.

Where some artists saturate the market, hoping that a hit here or there will buoy their commercial profile, “WYRM” is both sweeping and contemplative.  “Twenty albums deep, but still a new artist every two harvests” and further “Am I just a moment for a few to see” touches upon the new normal in today’s music industry; the pressurized give and take between artists and their fans to seemingly reinvent themselves each project for the sake of public reception and perception.

Produced by  Grégoire Verbekeinfo, the video for “WYRM” is a virtual synopsis of that sentiment; a memory Quelle hopes you will remember fondly. “So many of my memories are collections of collages from home videos, photo books and boxes of developed pictures” Quelle stated to Ambrosiaforheads.  “The lucky few who have escaped the fate of moments lost in disposable cameras; VHS and mini cam tapes. Orphans of history without a home. This particular memory was captured on a Canon 814XL camera and shot with Kodak Super8. Through the lens of  Grégoire Verbeke on a lovely afternoon in Brussels. A moment trapped in time. Ageless.---even as we fade. Will you remember?”