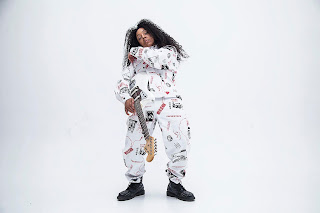 Hailing from New York, Mia LJ is an incredibly gifted multi-instrumentalist, singer, songwriter, producer & engineer recognized for being an “all in one” artist. Her genre blending sound has infinite replay value, unifying Soul Infused Indie Rock, Conscious Pop, R&B and EDM with a hip hop influenced lyrical flow supported by angelic vocals. Working towards her 2019 debut album release, Mia LJ is rapidly building a strong following. The album’s lead single “Coming Down” premiered in the Top 200 via iTunes Alternative Chart (USA) while also serving 14 weeks straight in the Top 100 on the Global Airplay Chart (DRT). Mia LJ’s latest independent release, Let Go, has garnered over 70,000 streams via Spotify alone in less than three weeks. Teaming up with visual artist Brellias from Santiago (Chile), Mia delivers the official music video for “Let Go.” This 5D animation serves as a universal message inspired through the practice of claircognizance, focusing upon the flow of energy and its effects on our reality. Mia explains further, “Everything in existence is nothing more than energy. E-motion is energy in motion. Society has been conditioned to perceive reality from a subconscious perspective. In this sense, the collective conscious aka society is drowning in itself. Drowning in emotion. Anyone can learn to swim. In the official music video for Let Go, note the shift from negative to positive words embedded in the planet’s terrain symbolizing healing & regeneration on a universal level. The shift has taken place. This is the moment. You choose. Conscious or subconscious? Freedom or manipulation? Life or Death?” “Let Go” was written & produced independently in its entirety by Mia LJ ; exemplifying her distinct flow and poised live instrumentation uniting with digital production. It’s rare we hear such authentic vocals in a market of auto-tuned flaws, making the song one to look out for and add to your playlists! Be on the look-out for more music & visuals as Mia LJ prepares the release of her debut album “Sacrament Of Sound” for later this year!
Posted by Jermaine McClinton at 5:49 PM