DJ Premier links with the Griselda Records collective for "Headlines" 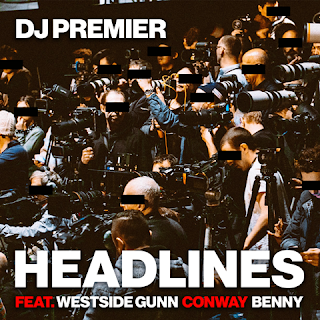 “This Griselda, DJ Preemo Shit”! Some things just sound so good on paper, that an eventual pairing seems inevitable.

The Griselda collective of Westside Gunn, Conway & Benny The Butcher (all emerging stars in their own right) is a unified family movement built on authenticity.  It’s cultural, it’s raw and it’s viral.  Griselda’s ascension, both collectively and individually is palpable.  From their inauspicious Buffalo roots, to signing with Eminem and Shady Records, in a non-plussed industry which advances style over substance, the Griselda juggernaut has created a real and sustaining moment. With the crews amazing run of both commercial success and critical acclaim there is no disputing that a real street ethos exists.

DJ Premier is a living auteur; his champion sounds have been the authority for the soundtrack of the streets for three decades.  While his ear sets Preem apart from his contemporaries, the legendary creator also has an inimitable ability to build a unique chemistry with each artist he works with. Whether it was Notorious B.I.G., Nas or Jay-Z, Preem has been a constant staple and bridge in Hip-Hop’s retro futurism, assisting in turning fast rising artists into rap royalty.

“I've wanted to do a record with them individually for a few years now.  I had been listening to Westside Gunn first.  Conway got my lyrical attention very heavy when Alchemist told me to listen to how he rhymes” Premier asserted. “Then after I got in tune with Benny's songs, I immediately knew that in order to follow up the Casanova record (“WUT U SAID”) it made sense to have all three on the same single. “Headlines” was made organically from a blank canvas at my studio at 2am and it happened so fast; and I loved their work ethic.  Pull the trigger on this one!”

When Conway proclaims on his opening bar “I don’t beef on the internet I approach you,” over Preem’s anthemic boom-bap, the modernization of an aesthetic from NY’s storied street rap movement comes full circle; and you are simultaneously transported back to the block when trunks rattled from blasting a new gem from a just released Clue tape.

With Griselda, bleak tales of survival and violent escapades are the topics at hand and DJ Premier is a conduit artistically elevating the sound of the life they lead.  And when Benny offers “I sewed the block together like a seamstress, and I lived to tell about it on some Preem shit,” it doesn’t come off as an admission of guilt, as much as it does the realization of a lifelong dream.

“Working with Preemo was surreal and watching him cook from scratch; I still can’t believe the record is done” exclaimed Westside Gunn.   “Shooting the video in my city (Directed by Jason Goldwatch in Buffalo, NY) makes it even more legendary!  This is just the beginning of our cook up and definitely one of the only things on my bucket list.”

DJ Premier, Griselda & Payday Records.  Certain marriages seem predestined until the streets say I do.  This is for the culture!  You ready?